You are here: Home / Archives for New World Record 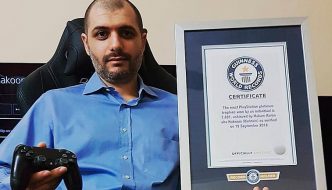 The well-known player Hakam Karim “Hakoom” achieves this achievement with 1,691 trophies. Hakam Karim “Hakoom” has won the Guinness Record, which credits him as the player with the highest number of PlayStation Platinum trophies in the world. Last year we talked about Hakoom since he was one of the only two players to beat the 1,200 marks worldwide. Leaving behind its most direct competitor, […]