You are here: Home / Android / Google Photos ends subscription service to print images on the app

A little-known feature of users of Google’s Photos app is the ability to create a monthly selection of images to receive their printed versions by mail. In fact, it is a little known service due to its limitation: it is only available in the United States.

However, just four months after it was created, the service is already being discontinued by the search giant. The function, which is still in the testing phase, consists of selecting some images, and, for the payment of US $ 8 monthly, the user receives this printed album by post.

Google directly informed all subscribers to the service by email, explaining the cancellation. “We are ending the monthly photo print evaluation program on June 30, 2020, so that we can make some improvements based on your feedback,” wrote Google to customers. “Although we are ending the testing program, we hope you have had some joy with the printed photos you received along the way,” adds the announcement. 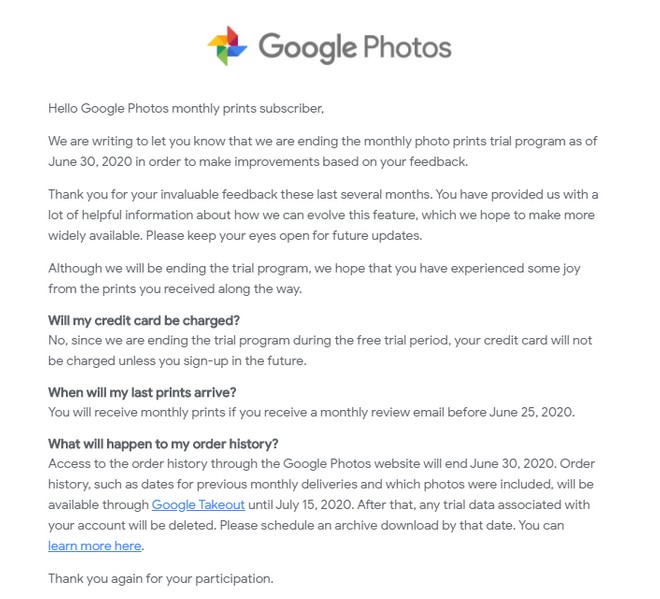 The company also pointed out that the orders already ordered will be delivered and that, after the end of the service, the user must request the archiving of the orders so that there is no loss of data. In addition, no charges will be made to customers, as the product will not have a sequence after the free trial period.

For residents of the United States, it is still possible to buy photo prints through Wallmart or at CVS stores, however, these orders will not be delivered by post. The digital album ordering service based on the images stored in Photos, however, remains available.

While this service is discontinued in the United States, the Mountain View company continues to invest in improvements to the Photos app, such as the ability to view images by location on a map, according to where it was recorded.