You are here: Home / Android / Will Samsung launch a fold able smartphone by the end of this year?

After the launch of Galaxy Note 9, most of the rumours began to turn to the arrival of the future Galaxy S10. However, 2018 is is turning a huge spotlight on another Samsung handset.

Samsung Galaxy F is the one we are talking about now. As Samsung prepares for the launch of the world’s first foldable smartphone we should expect a huge breakthrough in the market. Let us remind you that Samsung already started production of flexible displays this year. Now, to further increase consumer anxiety, new information about this device has appeared on the web.

As of now we don’t know much about the device and talking about its specification and other feature will be a blind guess. But as we all know Samsung has its own unique style and features, so whatever it would be it would be worth buying. 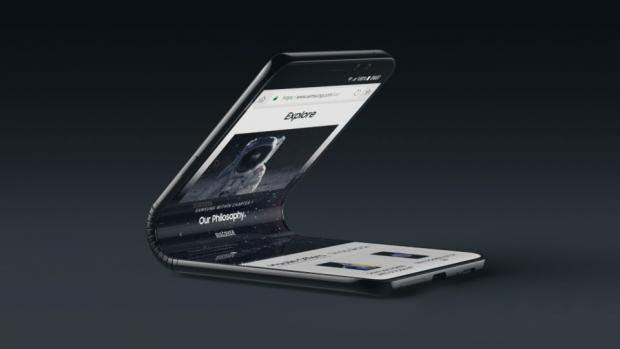 Talking about the press and other sources we still have no confirmation about the launch of Samsung Galaxy F. Yet we have heard a lot about this phone from Samsung`s official and other non-official sources.

We can expect the launch of Samsung Galaxy F by the end of this year, as said by the CEO DJ Koh in an interview for CNBC that the company is ready to bring to the world its next big bet in the smartphone market.

He did not give much detail about the Galaxy F’s look and how its mechanisms will work. Even so, he said that the company is already thinking about how to differentiate the device from a tablet.

“It’s time to deliver. So every device, every feature, every innovation must have a meaningful message to our end customer. It time to hear a loud surprise from our customers. We will give them a new reason for their loyalty”.

While not providing much detail, Koh left open that the announcement of a Galaxy F can happen during the Samsung Developer Conference, which takes place on 7 and 8 November this year.

However, we should not take this rumour as a certainty. That’s because Samsung continues to just play clues in the press as it starts producing flexible displays and fans rumours about the Galaxy F being the first 5G branded handset.

Do you believe we will see a Galaxy F in 2018? Tell us your expectation here in the comments.