Home Android The folding we want? Samsung Galaxy Fold 2 may have RAZR style...

The Galaxy Fold faced a number of issues shortly before its release, and Samsung had to postpone the device’s arrival to the final public, and for now, there is no definition of when the foldable smartphone will definitely be seen in stores. However, rumors have come from the international press that Samsung already designs a successor to its device.

Korean media today revealed that Samsung is working on a Galaxy Fold 6.7 successor that will double on the horizontal axis, something similar to what Motorola has been working on in its RAZR 2019.

2019 would be a year in which we would finally see a paradigm shift, with more options of flat, rigid and rectangular screens, capable of still offering opportunities for content consumption and productivity. However, in practice, what we saw was a series of brands that launched bulky and impractical products that look more like prototypes than finished products.

Who presented an interesting solution for the folding market is Sharp, who translated his patent of horizontally fold smartphones into a functioning concept that deserves attention. It uses the previous premise of turning screens from 4 inches to 7 inches through a flip, which makes the device compact when turned off and with a large screen when the user needs it. 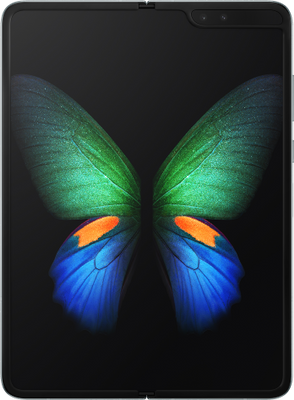 According to rumors from the Korean press, the successor to the Galaxy Fold will fold around the horizontal axis and will only have a small 1-inch screen on the outside to display date, time and notification icons, which is cheaper than the current solution device. Experts claim that Samsung has been looking for portability rather than more screen space.

While the Galaxy Fold, when opened, turns into a tablet, the idea is that its successor looks like a smartphone when being folded. The 6.7-inch display has the same size as the Galaxy S10 5G and is compact when foldable, without causing damage to the pocket, aesthetically speaking. Despite the problems, information from South Korea shows that Samsung has not given up plans to have its smartphones foldable.

Another proof that Samsung has not given up is the fact that the company plans to launch the device – company executives say the smartphone is ready – in the second half after solving the initial problems with the device, and the recent certification obtained by the device. The second generation Fold can begin to be produced from November, reaching the industrial scale from the first half of 2020.