After being listed on Samsung’s own support site, the Galaxy A82 5G was once again featured on the main rumored channels. That’s because a promotional video of the device was published on Twitter indicating that its launch may happen soon.

According to the well-known and trusted Max Weinbach, this video will be used by Samsung in the promotion of the Galaxy A82 5G, in which the company highlights two points: camera and battery.

You can watch the material playing below:

For now, the Galaxy A82 5G has no release date yet. Anyway, everything indicates that Samsung can present this smartphone at any time.

For those who do not remember, the premium intermediary should be announced with a 120 Hz Super AMOLED screen, Snapdragon 855 Plus processor, 6 GB of RAM, and 64 MP main camera. The expected battery should be 4,500 mAh and support 25W fast charging.

In addition to revealing that the Galaxy S8 line has been officially retired, the Samsung support website has also confirmed the existence of the Galaxy A82 5G. Although the device does not yet have an official release date, it has already been introduced in South Korea under the name of Galaxy Quantum 2.

Even before the phone’s launch, the South Korean company put it on its quarterly schedule of software updates. It also means that Samsung may soon launch the Galaxy A82 5G outside its home market.

Featuring a 6.7-inch AMOLED Infinity-O screen, the Galaxy A82 5G is expected to hit the market with a 120 Hz refresh rate. In addition, its processor is the Snapdragon 855 Plus, and it works in conjunction with 6 GB of RAM and 128 GB of internal storage.

Finally, the smartphone has a 4,500 mAh battery with support for 25W fast charging and already runs Android 11 from the factory. The only detail that remains uncertain is the possible price of the device in the global market.

There is little left! Galaxy A82 appears in hands-on video reinforcing design

Samsung can launch the Galaxy A82 at any time and this is very evident with the number of leaks that have emerged in recent weeks. Recently, we saw a series of real photos from the smartphone.

Now, new images published on the social network Weibo once again reinforce the design of the Galaxy A82. Thus, we know that, despite being the successor of the Galaxy A80, the new device will not have a rotating camera, for example.

In the current design, the rear is very reminiscent of other Samsung devices, since there is a rectangular module for the three cameras. See the pictures below 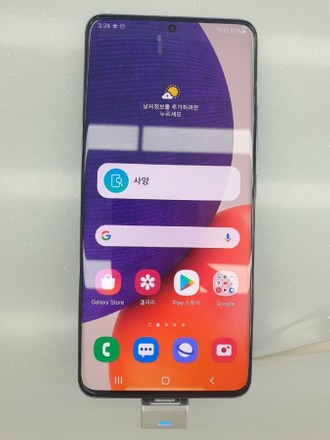 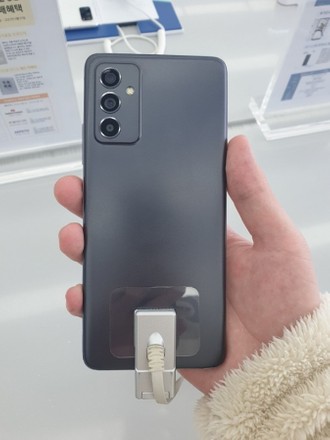 Another point that we can highlight is that on the front there is the traditional hole to accommodate the lens of selfies. The glass appears to be 2.5D, while everything indicates that the screen is a Super AMOLED 6.7 inches.

For now, the other specifications of the smartphone still remain a secret. Anyway, previous leaks confirmed that we are talking about a cell phone with Snapdragon 860 chipset and a 4,500 mAh battery, for example.

The video below shows the main highlights of the smartphone. It is worth remembering that in some markets it will be called Galaxy Quantum 2.

Everything leaked! Galaxy A82 shows up on the web once again confirming design and specifications

After showing up on the Google Play Console earlier this month, the Galaxy A82, Samsung’s premium-middleman is back to starring in leaks, this time, giving us something a little more substantial.

The following images emerged on a blogging platform in South Korea called Naver, and show in detail the packaging and several images of the so-called ” Galaxy A Quantum 2 “, identified by the code SM-A826.

As seen above, it is possible to observe design details such as, for example, the front camera centered in the shape of a hole in the screen and the triple set of sensors at the rear, with the main module bringing 64 MP of resolution.

The model should bring 6GB of RAM and 128GB of internal memory, and despite not having the chipset revealed, a Snapdragon 855+ is expected, accompanied by a battery with 4,500 mAh capacity.

The global launch should take place on April 23, and apparently, the A82 should arrive as one of the most robust of the Galaxy A-line.

Although we still do not know the release date of the new Galaxy A82, which should serve as a replacement for the Galaxy A80, information about the new Samsung device does not stop popping up on the internet and a recent appearance on Google Play finally showed us the front design smartphone.

The image shows that the device will have a central punch-hole at the top of the screen, to allocate the camera, but we do not know if it is the final design or just a preview that does not match the final version.

The device’s specifications on the Google platform show that the Galaxy A82 will come equipped with a Qualcomm SM8150P chipset. The model number confirms that the A82 features the Snapdragon 855+ processor. According to the Geekbench listing, the phone would have 4 GB of RAM, but the appearance on the Play Console reveals that it may also be available in a version with 6 GB of RAM.

The Galaxy A82 supports a screen resolution of 1080 x 2400 pixels and 450ppi of screen density. The device will come with Android 11 from the factory.

Did you like the specifications of the new Galaxy?

Galaxy A82: after new certification, details about the smartphone camera are released

After the launch of the Galaxy A52, A52 5G, and A72, Samsung’s new premium intermediaries, line A goes back to the business of the moment after the release of information about the camera of the future Galaxy A82, the smartphone will be the direct successor to the A80 and will serve as the basis for A Quantum 2.

The new Galaxy A82 is expected to hit the market with the main sensor similar to the A52 and A72 smartphones, with a 64-megapixel resolution sensor. However, the camera of the future model will be produced by Sony and the forecast is that the sensor used is the IMX686, the recently launched models have the Samsung ISOCELL GW1.

There is still no information on how the sensor will be arranged in the Galaxy A82 in terms of design, nor will there be a rotating camera setup like the A80.

Galaxy A82 undergoes new certification indicating that launch is near

While the Galaxy A52 and A72 continue to draw worldwide attention, Samsung is already preparing to launch the Galaxy A82. Unlike its smaller siblings, this device can hit the market with more powerful specifications and a mechanism to hide the cameras.

This Tuesday (9), the Galaxy A82 finally passed the Bluetooth certification. This already makes it very clear that we are getting closer to its official launch.

The only relevant detail published by Bluetooth SIG is that the numbering of the A82 is the SM-826S, and the device also has Bluetooth 5.0 Low Energy. See below the device’s plug at the regulatory agency: 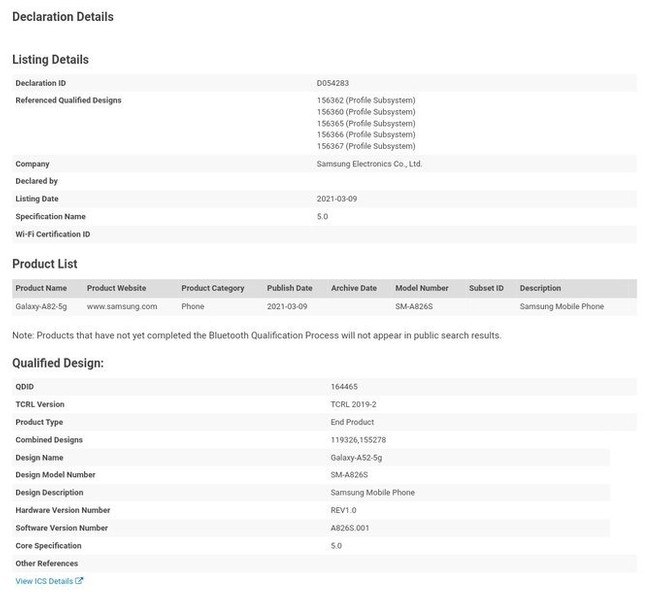 As much as the Bluetooth SIG hides the Galaxy A82’s technical sheet, Geekbench recently published that this smartphone should reach the market with Snapdragon 855 processor. The 2019 chipset should work in conjunction with 4 GB, 6 GB, or 8 GB of RAM and Android 11.

Taking into account Samsung’s history, the company usually launches its smartphones a month after being certified by Bluetooth SIG. This indicates that the Galaxy A82 may be introduced to the world in April.

Remember that the other specifications of the new smartphone still include a 6.7-inch Super AMOLED screen with FHD + resolution. In addition, we also expect a digital reader under the display, 120 Hz refresh rate, and 25W fast charging for the 3,700 mAh battery.