You are here: Home / Android / Samsung Galaxy A80 Has More Going For it Than Camera Gimmicks

With the Galaxy A80, Samsung presents a smartphone that serves as a true flagship for its mid-range family. Like its kin, it has a unique feature to offer. This time it’s a turning pop-up camera combined with a full-size display. We have already tried the device and can give you our first impressions about the device. 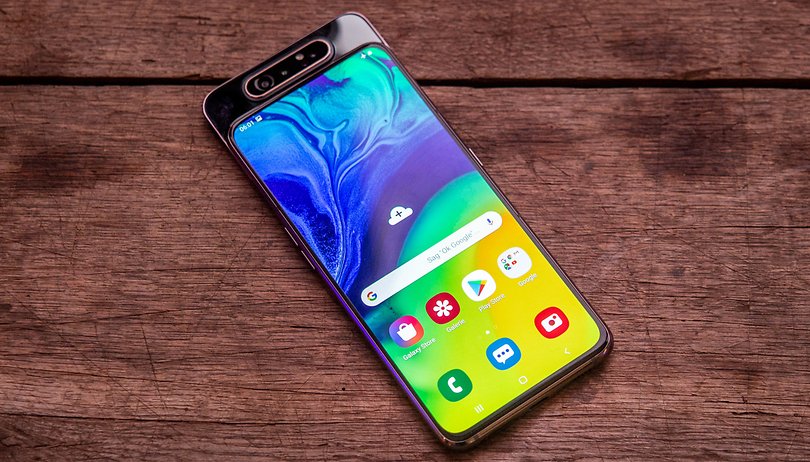 It Won’t Be Exactly Cheap

At the introduction of the Galaxy A80, Samsung did not yet quote a cost for the flagship of its mid-range series. But, this will most likely be over 500 dollars. It is expected to be launched in April this year and it will be available in black, gold and silver color.

A Full Display Thanks to Extraordinary Tricks

Similar to the Galaxy S10, Samsung has a completely front-filling Super AMOLED display in 20:9 format in the Galaxy A80 also. That’s a full 6.7 inches in size with Full HD+ resolution and shines like a regular AMOLED with rich colors and profound blacks. The brightness also seemed to be sufficiently high in the main test. 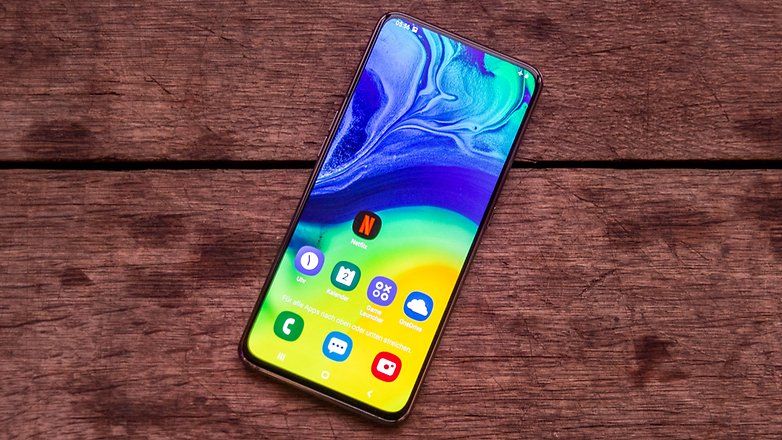 Speaking of holding: At 9.3 millimeters, the Galaxy A80 is extensively thicker than its kin. In spite of the fact that it is a bit bulbous, it fits well in the hand because of its rounded back to the long sides. It doesn’ t feel as bulky as it seems at first look. Nevertheless, you must know that you can’t get a slim phone here.

But how does Samsung do it with the vast Infinity Display? By putting the manufacturer’s proximity and brightness sensor under the display. And rather than squeezing the earcup into the tight frame above the display such as on the Galaxy S10+, the South Koreans depend on the same technology as Huawei on the P30 Pro. When calling, the sound is transmitted by display vibration. The fingerprint sensor is also incorporated into the display and scans optically.

Three Cameras For Both Sides

What about the selfie camera in Galaxy A80? An indent or a hole in the display? The Samsung Galaxy A80 lacks any trace of this. Instead, Samsung has come up with a special trap for the camera. The manufacturer copies the slider mechanism of the Oppo Find X and joins it with the rotating camera of the Oppo N1.

The outcome is a retractable camera module that can also rotate easily. If you activate the camera application, the module moves out like the slider of the Find X and the oval, camera module rotates 180 degrees on the horizontal axis. Additionally, the main camera also serves like a selfie camera.

And here users have three sensors available to them: 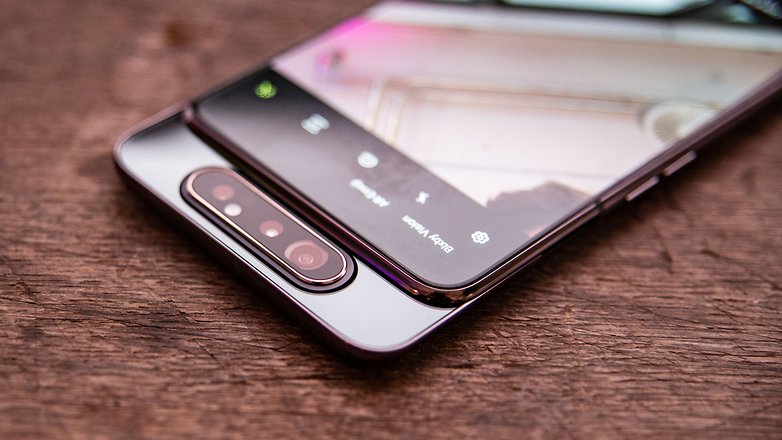 This opens up various possibilities for photographing, regardless of in which direction. Wide-angle shots are similarly as possible as group selfies and portraits work brilliantly because of the Time of Flight camera.  The camera also helps with depth detection in augmented reality apps. A bit of AI also plays a part in the camera app and offers scene acknowledgment, for instance, as in the present high-end models.

Unfortunately, we can’t give you any test pictures or further information about the camera application yet. This is not the final software yet, so we should do this later with our review device. Also moving pictures from the camera module we are not permitted to show you yet.

As on all other new Galaxy-A smartphones, the software uses the present Android version 9.0 pie. Samsung puts his new One Ui 1.1 over it which is a good thing. Without the extraordinary improved surface for large displays, the large Galaxy A80 could exclusively be operated with only two hands. So you can at least do little errands with one hand.

Snapdragon Rather than Exynos

There is a little surprise under the hood of the Samsung Galaxy A80. It is not one of Samsung’s Exynos chipsets which are used here, however, the Snapdragon 7150 with a maximum of 2.2 GHz from Qualcomm, which is supported by 8 GB RAM and 128 GB expandable read-only memory (microSD).

For what reason? What Korean manufacturer wants to offer with the model, the Qualcomm chip was most appropriate. As the flagship of the mid-range series, the Galaxy smartphone should also convey superior performance. As they tell us on request, they don’t presently have the right Exynos for it and have therefore they pick Qualcomm. 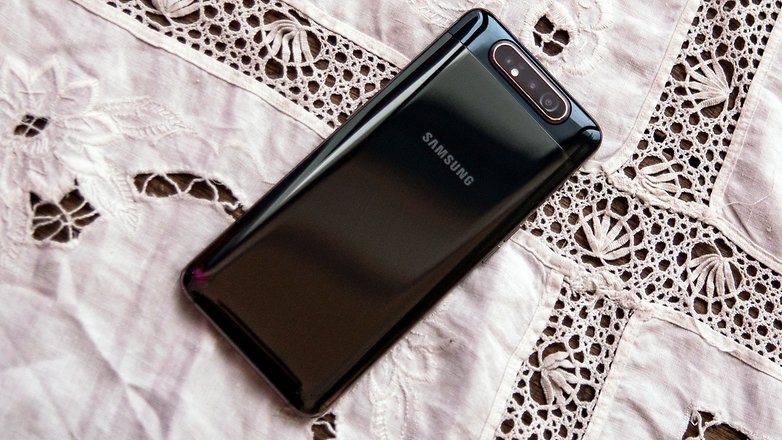 When we first give it a shot, we couldn’t detect any shocks or long periods of reflection when opening applications. Whether the Galaxy A80 can also deal with complex 3D games and how it performs in daily life, our final test will have to show.

It Could Reach Two Days of Running Time

As an energy source, Samsung uses a 3,700 mAh battery in the Galaxy A80, which can be recharged rapidly with 25 watts via the “Super Fast Charging” power supply. Obviously, we could not put the battery life to the test in our hands-on. The combination of an economical processor, Full HD resolution and said capacity, in any case, gives hope for two days running time with really economical use. 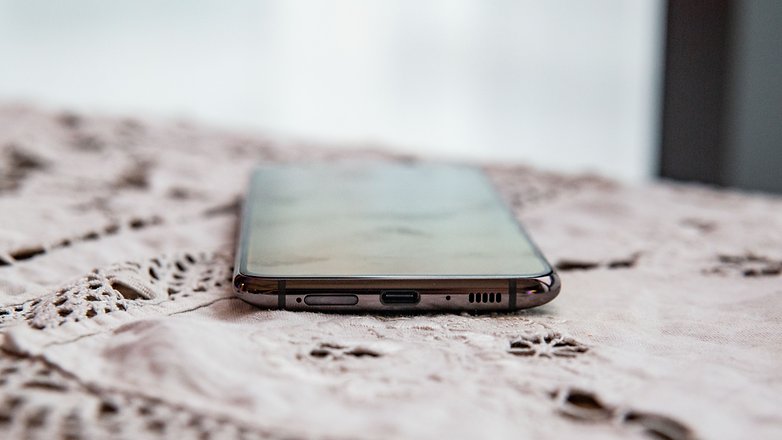 We’ll see if this works in the final test or not. Of course, an intelligent battery management system is also used here to analyzes habits and application usage patterns to optimize power consumption. It is charged through USB-C port on the underside alongside the jack port, as can be seen in the picture above.

The Samsung Galaxy A80 with its rotating camera is a really special smartphone and demonstrate that Samsung still has it. Yes, the Galaxy S10 also has an interesting novelty to offer with the hole in the display, however, even that can’t support the wow effect on this device forever. Unfortunately, the new Galaxy smartphone also looks a bit like it was somehow built around the camera gimmick.

This doesn’t imply that the Galaxy A80 is purely shown. On paper and even during our hands-on session, the smartphone makes a decent first impression, despite the fact that the battery could have been somehow bigger in size and thickness. But the big feature, the camera, still leaves a tasteless flavor, because it doesn’t appear like it will be very durable.

Of course, this is hard to check, but we will take a closer look at it for our final test when the final software is available and we can take a closer look at the technology behind the retractable camera. Until then I’m doubtful, however, I’m happy that Samsung is attempting a new technique.