Nokia is preparing to make new mobile phones soon. The brand that is currently under control of HMD Global is due soon to present a new relaunch of a classic, the Nokia 2720 4G, and also at least two intermediaries known as Nokia 6.2 and Nokia 7.2.

The duo has already shown their faces on a variety of occasions and now one of them shows their faces in real image confirming previous renderings.

Nokia 7.2 is the target of the time, and the image shows that it must even have a circular rear camera, as previously anticipated in other renderings and leaked images.

Here we see that it must have a system with three rear cameras, as well as an LED flash, all within a single module. The device’s name has also been confirmed. This is all due to an accidental publication by Zach’s Joachim Kuss. Look: 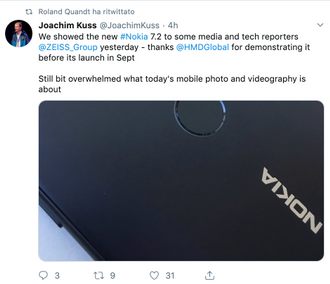