Among the most popular devices to wear on the wrist are no doubt the Apple Watch. Apple is an undisputed king of the smartwatches and wristwatches. Apple is the Cupertino giant and has been producing smartwatches for several years now but Fitbit is relatively new in this field but already mainly known for its excellent fitness trackers. But the latest addition of Fitbit, Fitbit Versa, can be a better alternative to the world’s most popular smartwatch in many ways. So let’s see how it is better in many ways… 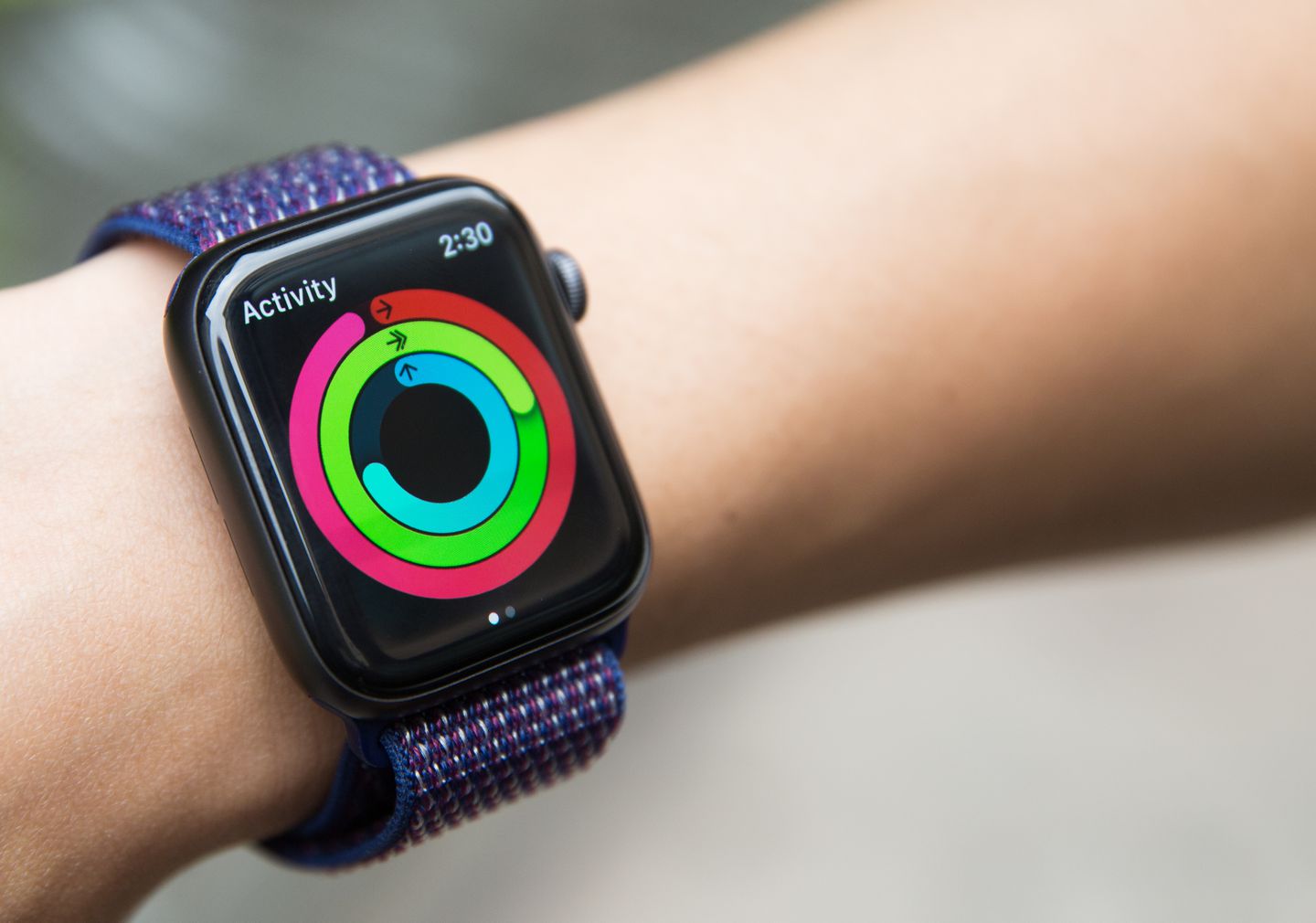 In this article, we are not making a comparison to establish which device is best, but we simply want to express their best aspects to help users. Many of you often hear the question that “Which smartwatch should I buy?”.  Well, this comparison makes it clear to all users that it is not necessary to jump immediately on the Apple device but according to the daily habits Fitbit could be the right choice for you. 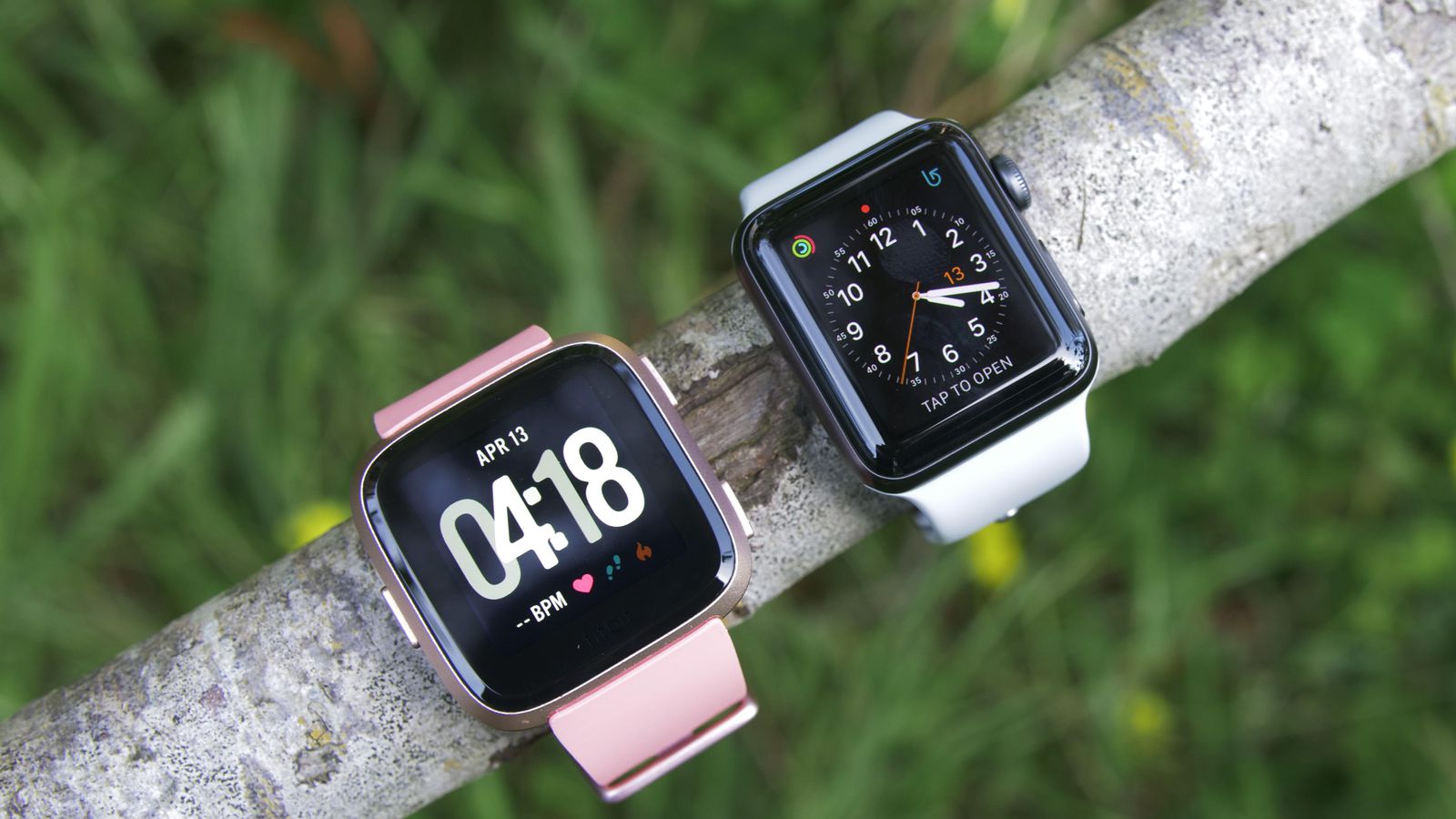 Fitbit has defiantly taken its cue from Apple:

Both Apple watch and Fitbit Versa watch have a rather similar design at least as far as the case is concerned and the case will surely attract a lot of people. They both share a square display with rounded corners, but it’s not true for the physical buttons. The Cupertino device uses a single button on the right side with a rotating crown, while for the Versa watch, it has three physical buttons, one on the left side and two buttons on the right side. Despite being produced by two completely different companies, it’s not difficult to see how Fitbit has taken some stylistic cues from Apple Watch. It is so much similar that some people called the Versa is “the Apple Watch Lite”. 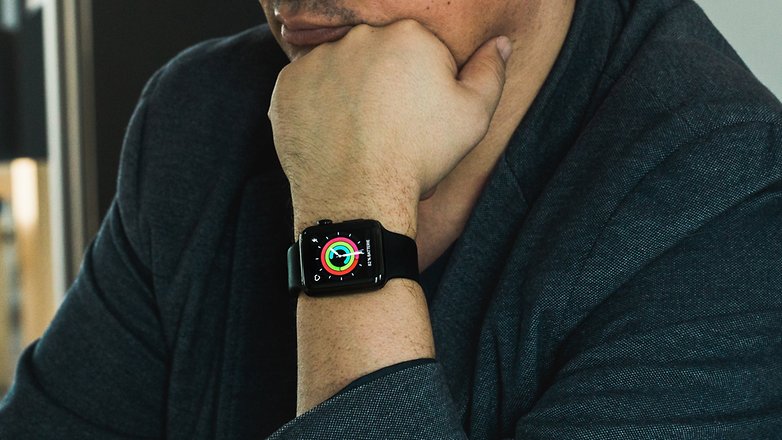 Apart from this last statement, Fitbit Versa is definitely lighter and slimmer than Apple Watch and this detail gives a greater comfort on the wrist. Most of the people who used Fitbit Versa watch won’t deny that sometimes they completely forget that they have it on their wrist. Apple claims a thickness of 10.7 mm for its smartwatch and this measurement is far too optimistic.

Both devices shared a particularity which is that they support interchangeable straps. It is not possible to buy standard straps because of coupling and uncoupling system is proprietary. There’s little to be scared because of both manufacturers, especially Apple, it offers a whole range of straps with styles of all kinds to suit all users, including silicone, nylon, stainless steel. Fitbit also offers several options for straps, but it does not have the same choice of colors and materials as offers by Apple.

When it comes to building quality they show same similarities so there is really too little to discuss. Apple Watches are built with materials of much higher quality and with particular attention to every detail, from its aluminum case to a rotating crown. Fitbit Versa is also not a cheap object, but if you put it next to the Apple device then there is no story and it is a quite understandable thing. After all, it also costs half the price of its rival watch, so it’s impossible to expect the same level of quality as Apple. 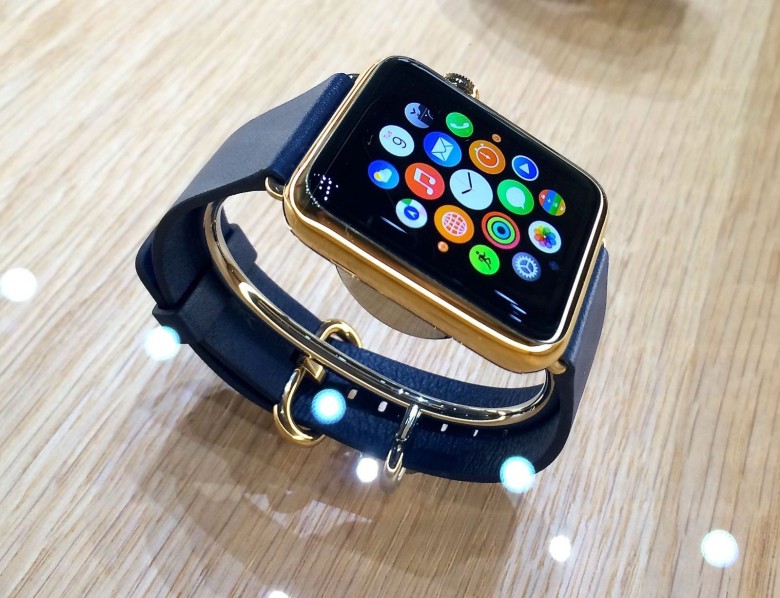 The same level of question is also extending when it comes to displays. The OLED Retina screen on the board of Apple Watch is fantastic. It shows deep blacks and bright colors, and the panel also supports Force Touch. In comparison, the 1.34-inch LCD screen of Fitbit is also not bad, but by using both smartwatches you will also notice an abyssal difference between the two with the naked eye, even more so when they are placed next to each other. 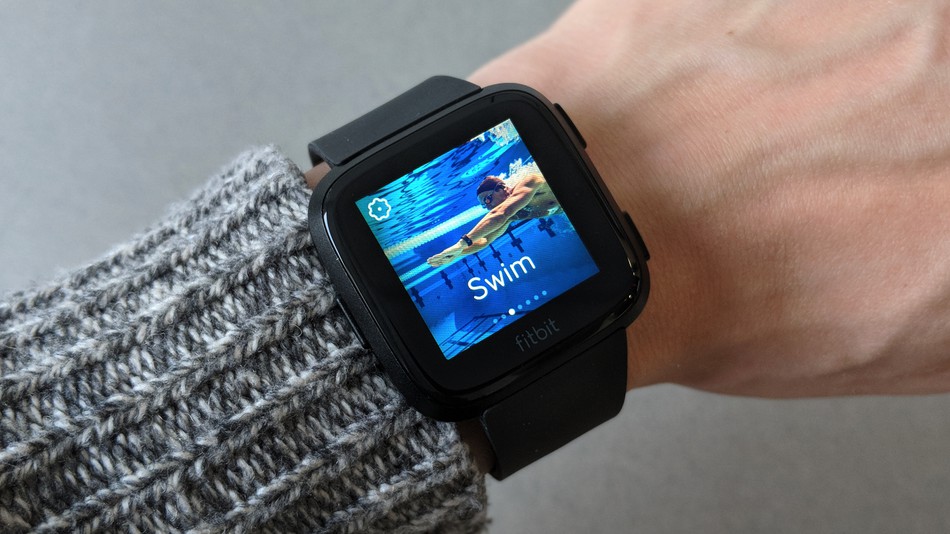 Despite the fact that an OLED screen can save more battery power than an LCD but battery life is a strong point of Fitbit that makes Apple Watch look bad. Apple Watch can stay alive for a whole day or one and half day on a single charge but on the other hand, The Versa watch has an abundant four-day autonomy with a single charge, despite its task of constantly tracking activities, sleep, and heart rate.

In the software you recognize the most experienced:

As far as software is concerned, the approaches of the two manufacturers are completely different we can easily see the difference between both of them that who have been producing software for years and who have not. Apple Watch’s software is very clean in style and also very fast. Pressing the digital crown will bring you to the honeycomb pattern and encloses all the apps installed, while prolonged pressure will activate Siri. People may hate Apple’s virtual assistant; the smartwatch is much faster than Google Assistant on a Wear OS watch. 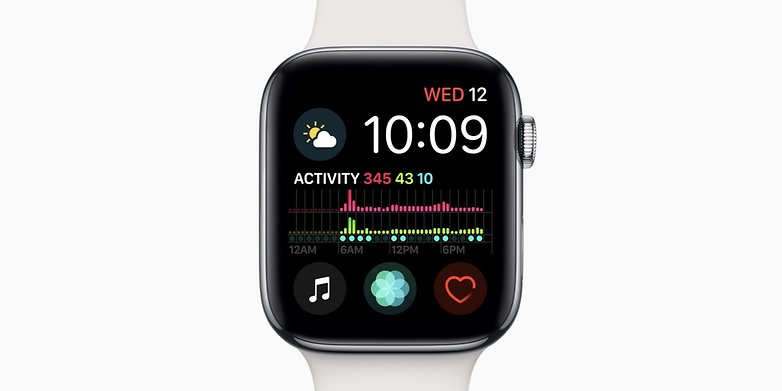 The constant use of these voice assistants by users puts the Fitbit device in crisis because the Versa has no assistant, so you have to do everything in the “old-fashioned” way, through moving the touchscreen display, swiping and touching. It was a predictable thing because Fitbit OS is only a few years old. After the official launch of Fitbit Versa in 2017 together with Fitbit Ionic, the Fitbit software is still far from perfect. But it is much easier to use than watchOS for those peoples who don’t demand too much will be able to satisfy their needs with the Versa. 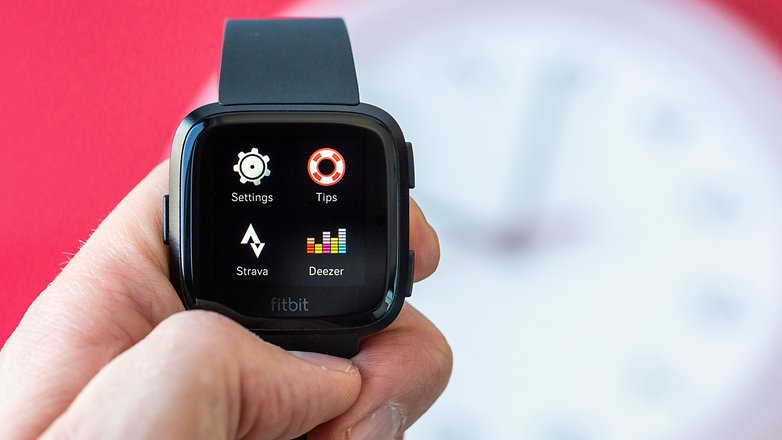 But when it comes to third-party service the circle narrows down, a field where Apple Watch dominates and is by far the best choice. Any popular app is also available for Apple watchOS, but the same cannot be said for Fitbit OS. The latter’s app ecosystem is growing, but it’s still far behind what Apple has to offer. Fitbit recently has given access to developers to new APIs and enable them to create higher quality applications. Still, its remain to be seen how much incentive they have to create apps for an operating system that is not convincing.

Apart from applications, both of them allows you to receive and reply to messages which received on your smartphone, but with some limitations. While Fitbit Versa is compatible with iOS and Android and allows you to reply to your message when you paired it with your smartphone. But Apple Watch is only compatible with iPhone devices and is therefore bound to this aspect. Both watches connect through Bluetooth and support Wi-Fi, but Apple Watch is also available in an eSIM variant that allows users to leave home without a smartphone. 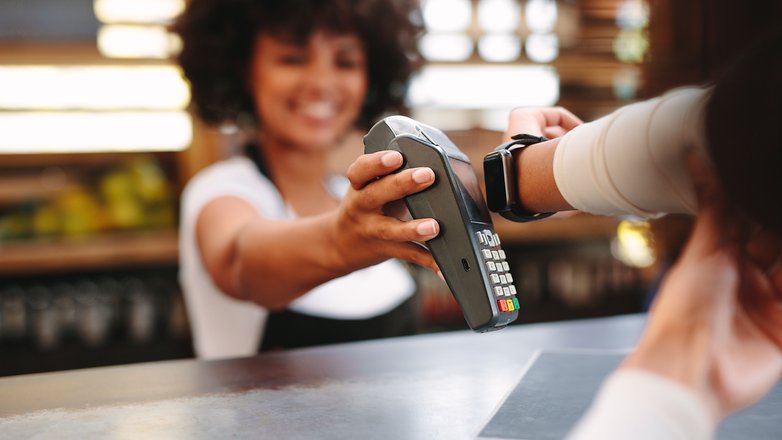 Finally, when it comes to mobile payments, which is something we hear so much about today. Every company has its own contactless payment service. Apple Pay is obviously part of Apple Watch, for Versa you can find Fitbit Pay. Apple Pay has been around for a long time and the enormous power of the Cupertino giant has allowed it to get the support of hundreds of banks around the world. On the other side, the list of banks able to support Fitbit Pay is still rather scarce, especially in Italy. Let’s say it’s still a work in progress…

Apple watch or Fitbit Versa: Which one to buy?

Purchasing one or the other depends mainly on a key factor which smartphone do you own? If you have an Android device and you are not going to switch to the iPhone, then you have to buy Fitbit Versa. Apple Watch will never work with your Android smartphone. 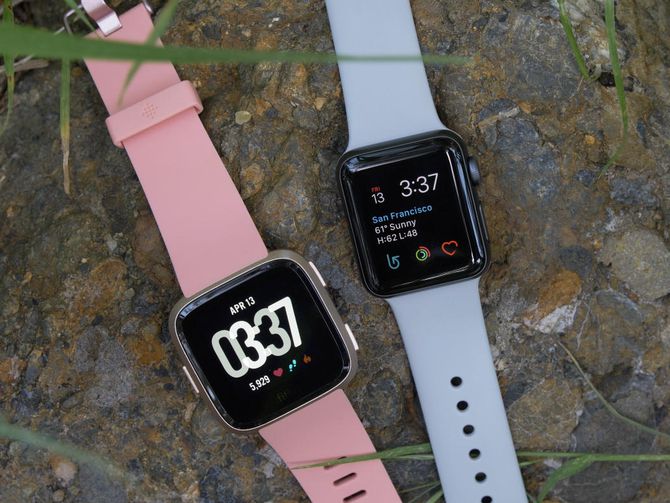 The real choice comes when you own an iPhone. Apple watch is purchased by those who want to get the best of the best will have to go on the safe side. The Versa is a choice to take in case you have a limited budget.

It is impossible to say which one is best because both f them are fantastic in their respective areas. The Fitbit Versa offers a lot and at a lower price, while the Apple Watch is a complete smartwatch that anyone would like to buy if they don’t have to worry about the price.