You are here: Home / Apps For PC / Wingy Shooters Epic Shmups Battle in the Skies Review & How To Get For Mobile & PC 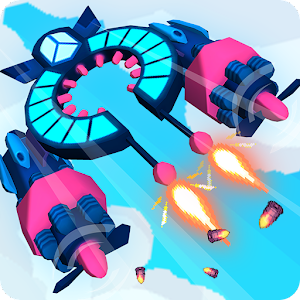 Wingy Shooters is a multidirectional SHMUP in which players can get at the controls of a fighter plane, with which they will have to face endless waves of enemies of all kinds. Within each of the levels of the game we will have absolute freedom of movement. We can fly in any direction and explore as much as we want, but we must always keep in mind what our goal is, since only by fulfilling we can finish the level successfully.

The Wingy Shooters control system is not only very comfortable, it is perfectly natural on touchscreens. To control the flight of our plane we will only have to press our thumb on any place on the screen and slide it slightly in any direction. With this virtual ‘stick’ we will be able to pilot the ship to perfection: controlling both the direction and the speed of the movement. As is tradition in the genre, the shot is fully automatic. Our ship will constantly be launching blasts of destruction from its front, so we only have to worry about pointing them in the right direction.

Once we start playing, our objective will normally be to destroy a certain number of enemies. This task, which may be easy at first, will get more and more complicated as we run into tougher and tougher rivals, capable of bringing down our ship with the slightest carelessness. This is especially true for bosses, who, while they will pose colossal challenges, will also bring us enormous rewards. At the end of the day, every enemy we manage to kill will be converted into coins. And with the coins we can both unlock new ships with which to sail the skies, as well as improve the ones we already have in our hangar.

In total, in Wingy Shooters we will be able to pilot more than twenty ships, each one different from the others. When we start playing we will only have one red combat ship, but as we complete missions and earn coins, we will be able to acquire many more. From a war helicopter to a futuristic ship, passing through a giant duck, each of the ships will offer us a slightly different experience from the others.

Wingy Shooters is an outstanding SHMUP at all levels, which not only has a control system perfectly adapted to mobile devices, but also manages to offer a totally satisfying and natural gaming experience. A gift for lovers of the genre and, more importantly, a great starting point for anyone who wants to delve into it.

Here we will show you today How can you Download and Install Arcade Wingy Shooters Epic Shmups Battle in the Skies on PC running any OS including Windows and MAC variants, however, if you are interested in other apps, visit our site about Android Apps on PC and locate your favorite ones, without further ado, let us continue .

That’s All for the guide on Wingy Shooters Epic Shmups Battle in the Skies For PC (Windows & MAC), follow our Blog on social media for more Creative and juicy Apps and Games. For Android and iOS please follow the links below to Download the Apps on respective OS.